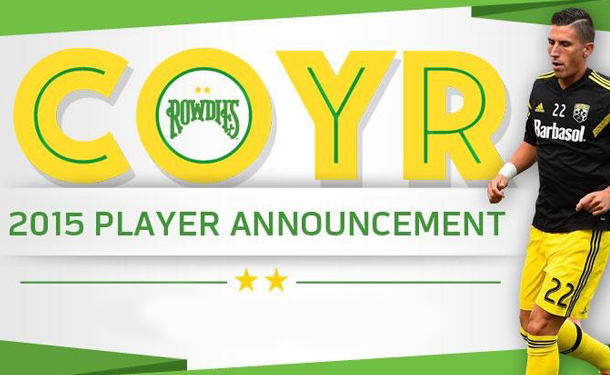 RIO MAIOR, Portugal (March 2, 2015) — One of the Tampa Bay area’s brightest prospects is coming home as the Tampa Bay Rowdies announced on Monday the signing of Ben Sweat ahead of the 2015 North American Soccer League season. Per club and league policy, contract details were not disclosed.

Sweat, 23, returns home to the Gulf Coast after spending the 2014 season with the Columbus Crew in Major League Soccer. Sweat is a Palm Harbor native and product of the Clearwater Chargers Academy. A 6-foot-2 natural left back, Sweat played his club career for the Chargers SC US Soccer Development Academy, the Rowdies’ official USSDA partner.

"I'm super excited for this opportunity to play in my home town and play in front of friends and family every game," Sweat said. "I'm proud to represent this club and wear a Tampa Bay Rowdies jersey. I'm looking forward to this season and getting out onto the field with a Rowdies logo on my chest."

Sweat also played four seasons at Palm Harbor University High School, leading the Hurricanes to the Class 5A state championship game in both 2009 and 2010, winning it in 2009. In addition to First-Team All-County accolades, Sweat was the Tampa Bay Times’ Pinellas County Player of the Year in both 2009 and 2010.

After a standout youth club career, Sweat stayed home to star for the University of South Florida under head coach George Kiefer. Sweat was a regular starter for the Bulls in his four-year career, making 78 appearances to become USF’s all-time leader in games played. In his senior year in 2013, Sweat was named to the 1st-team American Athletic Conference.

Sweat was selected 14th overall by the Crew in the 2014 MLS SuperDraft, but did not make a league appearance. He played in the Crew’s win over Indy Eleven in the Lamar Hunt U.S. Open Cup and he made seven appearances for Dayton Dutch Lions while on loan in 2014.

Sweat brings speed and technical ability to the Rowdies’ backline. He will wear the #4 jersey this season.

“We are proud to bring Ben back to the Tampa Bay area,” commented Head Coach Thomas Rongen. “Not only is he technically gifted at the left back position, but he is also big and physical. This is a superb signing for our club and signals our intent for how we want to play this season.”

The Rowdies will open the 2015 season against the San Antonio Scorpions, the 2014 Soccer Bowl Champions, in San Antonio on April 4.  The home opener follows on April 11 against Minnesota United FC, the team with the best overall 2014 record and the defending Spring champion.