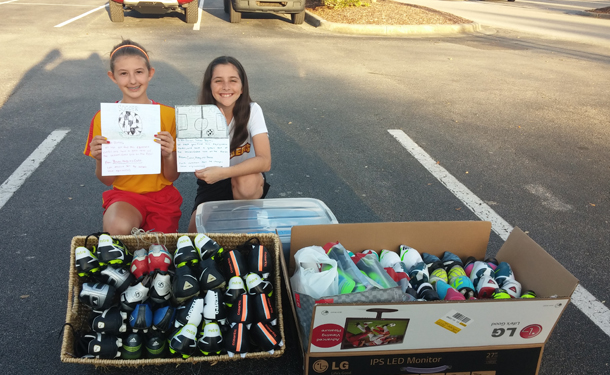 In late January several Tampa Chargers (from the U12g & U14g), while playing middle school soccer, played a local school and they realized that most of the girls on the other team were playing WITHOUT ANY CLEATS or SHIN GUARDS!!! Sadly, one girl even got hurt when she was kicked in the shin.  These Chargers reached out to the opposing coach and was told that most of the girls on this team had NO access to supplies due to cost.

Well, Brooke, Haley & Callie (TPA Chargers U12g), with the support of their parents, weren’t willing to leave it at that.  They believed there was something they could do and they did.  After the email blast they sent out through the club to Charger families, they gathered up and passed on generous donations from many Charger families (pictured here) .

Way to go girls!!  The power of community support and sharing with fellow soccer girls!!