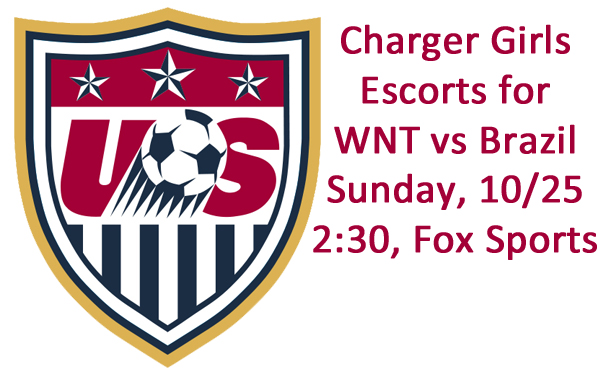 On Sunday, 10/25/15 at 2:30 pm check out FOX Sports 1 or FOX Sports GO to watch the Chargers U9 girls from all three Charger Communities (Tampa, Lakewood Ranch & Clearwater).  The U9 girls will be the escorts with the US Soccer Women's National Team at the Citrus Bowl in Orlando at their rematch with Brazil.  As a Nike Premier Club supported by our long standing relationship with U.S. Soccer, the Chargers were asked to fill this great honor.  Way to go, girls!!  Make us proud!!  GO CHARGERS!  GO USA!!

The Chargers SC u9 girls players had an awesome time and experience as the escorts for the pre game ceremonies of the United States vs. Brazil Women's National Teams game at the Orlando Citrus Bowl, Sunday October 25, 2015!
Way to go Chargers SC girls and USA ! WNT and Brazil Ready for Victory Tour Rematch in Orlando

WORLD CHAMPIONS COME TO ORLANDO TO FACE LONG-TIME RIVAL BRAZIL IN SIXTH MATCH OF VICTORY TOUR: Following its historic run to the championship of the 2015 Women’s World Cup in Canada, the U.S. Women’s National Team has embarked on a 10-game Victory Tour across the country that will serve the dual purpose of celebrating the USA’s third Women’s World Cup title with the fans, while also preparing the team for the 2016 CONCACAF Olympic qualifying tournament that will take place in early February of next year. The Victory Tour hit its mid-point on Oct. 21 when the USA faced Brazil at CenturyLink Field in Seattle. The Americans gave up a third-minute goal to Monica off a corner kick, but as she has all year (and for many years), Carli Lloyd scored a clutch goal in the 85th minute to earn a 1-1 draw. The teams traveled to Florida on Oct. 22 for the second match of the two-game set on Oct. 25 at the Orlando Citrus Bowl (2:30 ET on FOX Sports 1, FOX Sports GO). Fans can follow all the action from #USAvBRA on Twitter @ussoccer_wnt and @ussoccer_esp, and follow the team along its journey on Instagram and Snapchat (ussoccer_wnt).   Continue . . .