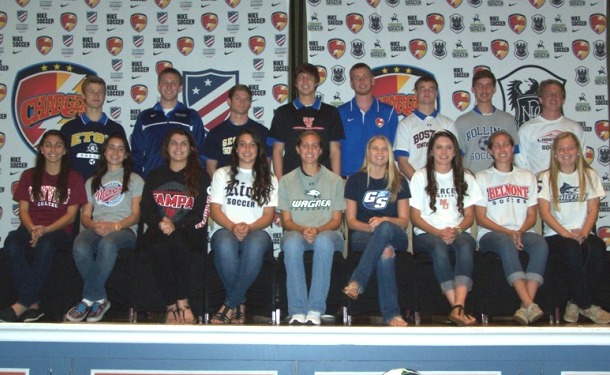 CLEARWATER, Fla. – Chargers Soccer Club is proud to congratulate its 20 boys and girls players who have committed to play college soccer in 2013. A total of 10 members of the U18 USSF Development Academy Boys team and 10 members of the U18 Clearwater Elite Girls team were honored in a special National Signing Day Celebration tonight at the Safety Harbor Resort & Spa as they prepare for the next chapter of their academic and athletic lives. “At Chargers SC we take great pride in preparing our players to move on to play both collegiately and professionally, and it’s exciting to see another strong group of boys and girls achieving their goals and embarking on the next adventure in their lives,” Chargers SC Co-Director Peter Mannino said. “The time and effort they’ve put in the past several years will prepare them for the challenges they will face both on and off the field.”

More than 750 Chargers Soccer Club alumni have gone on to play college soccer since 1972, including more than 60 during the past three years.

The U-18 Boys U.S. Soccer Development Academy team is coached by Garth Pollonais, Roberto Lopez, Tim Mulqueen and Peter Goulish. The U18 Clearwater Elite Girls are coached by Siggi Nagele.

In addition to the NCAA, former Chargers can currently be found playing in MLS, European professional leagues and for U.S. National Teams. Recent Chargers SC alums Zac MacMath and Jeff Attinella currently play for the Philadelphia Union and Real Salt Lake of the MLS, respectively.