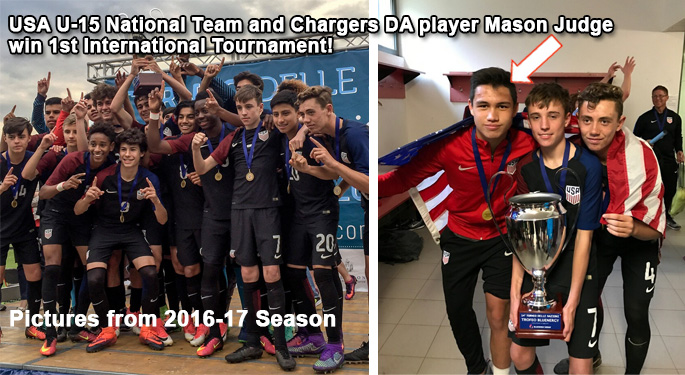 Mason continues to receive National recognition for his incredible performances over the last year. Mason has been called into the 24 man roster for the U-17 USA National Team to take on the likes of England, Holland and Brazil in Lakewood Ranch, FL. Every player called in to the USA team is currently a DA player.

Over the past year, Mason has been a key figure for the U-15 USA National Teams, helping guide the team to a tournament victory in an Italian Tournament, which saw USA beat the likes of Russia, Portugal, England and others.

Mason then continued to excel at the CONCACAF U-15 Championships, guiding the team to 4 straight victories to top their group and win in the semi-finals. USA and Mason were unlucky to lose to Mexico in the Championship Game, however, Mason had clearly established himself as a key member of the USA Defense.

Now as the 2002 age group cycle moves into the U-17 age group, Mason has been called into the first U-17 USA camp.

Mason & the USA team will train throughout this week and then, at the Lakewood Ranch Stadium (PSC) will take on:

The 2002 age group will compete together for 2 years in the hopes of representing USA at the next U-17 World Cup.

Come join the Chargers Family and the American Outlaws St. Peter Chapter as we chant and cheer our support for our very own Mason Judge, as he takes on the best players in the world this week in our own Chargers Stadium at Lakewood Ranch.  This Wednesday at 7 pm let's pack the stands with our Chargers Gold Jerseys in support of Mason, USA and show the entire Nation what the Chargers are all about!