Chargers DA - A Year In Review 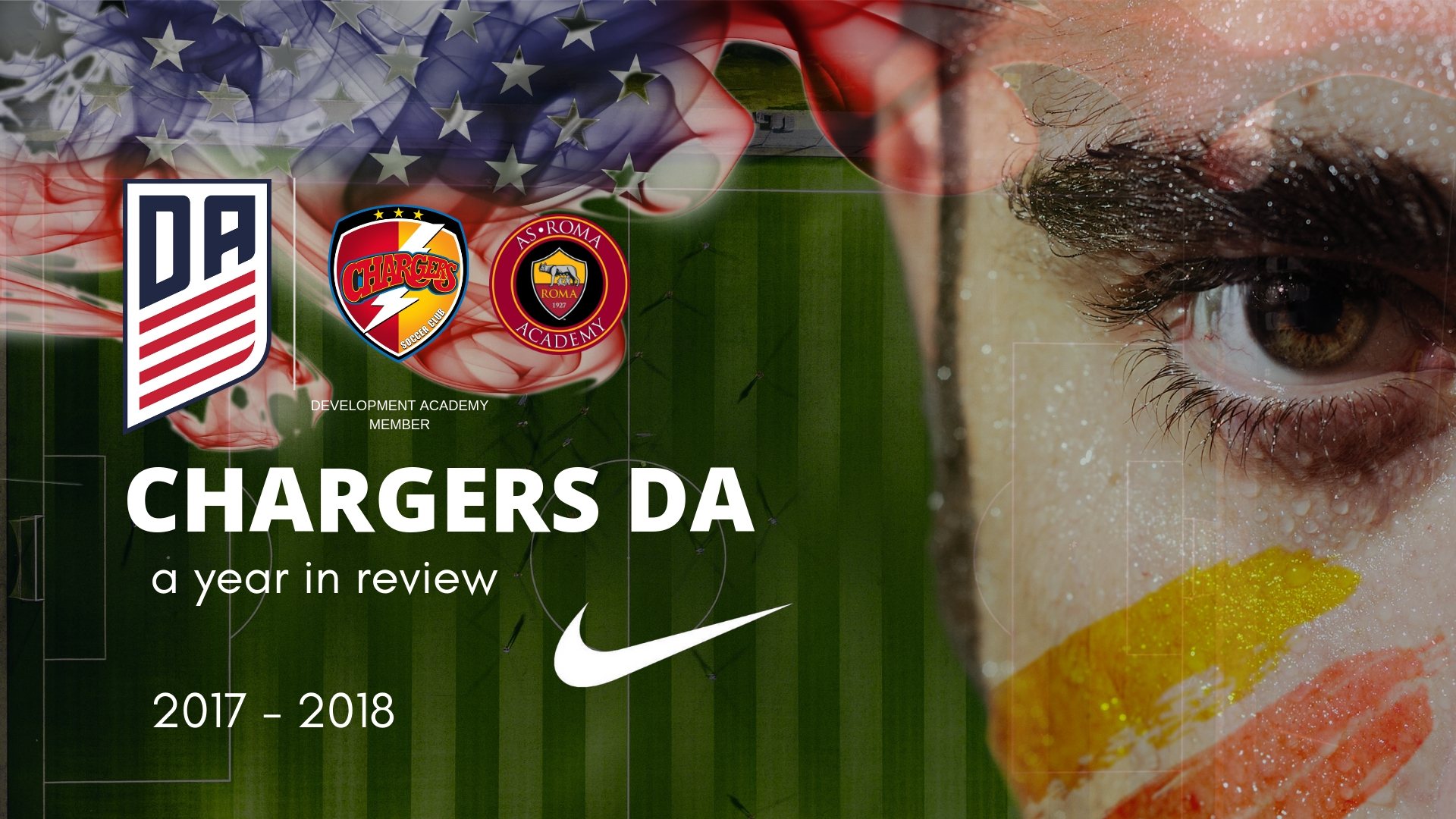 The last three years have marked the most successful in the Chargers SC Development Academy history since the program's inception in 2007. The launching of the u12 and u13 ages for the DA has dramatically helped improve the quality of play and development of the older DA teams. At Chargers SC we focus on playing a possession-based style of attack and work to help develop technical, intelligent, creative and bold players. Defensive we firmly believe in imposing our will on the opponent through organized team pressing and quick transition counter pressing when we lose possession. At the 12 and 13 ages this philosophy has been extremely effective in producing future National Team level players, as well as the quality of team performances and results.

While results are not our focus at the youngest ages since U.S. Soccer has expanded the DA down to the u12s and u13s, our junior teams u12, u13 and u14 have won every game vs the DA teams in our local region: TBU, IMG, Players Club. This year we saw our first class of u12 DA players graduate to u14s and the individual player and team development has been fantastic. They have been dominant in possession, pressing and every facet of the game vs all of the regional DA teams, including a 14-0 win vs IMG and a 3-0 win vs TBU this year. With 7-0 and 6-0 wins last season.

Our primary focus is on producing National Team players and we have been very successful doing that over the past two years. This year alone we have 8 players that were called into the U.S. Youth & Men’s National Teams and had 9 different players who were invited to train with U.S. Youth National Teams throughout the year.

We are dedicated to providing an environment that provides a professional pathway to the top levels of soccer in the world and domestically. Chargers SC has a close affiliation with AS Roma of the Serie A in Italy, to provide our top players exposure and a pathway to become part of a top club in the world. This Affiliation serves to push our environment to even higher standards, using the training methodology that is used by a top 10 team in the world in AS Roma within our Academy, while also allowing AS Roma scouts to interact with our players heavily. Just in the 2016-2017 season alone, 9 Charger players were selected to train side by side with the AS Roma first team and train with the AS Roma Academy teams in Rome, Italy. In addition, we had two players on trials at West Bromwich and Liverpool FC in England. One of our Charger SC players, Mason Judge, has signed a professional contract with Eintracht Frankfurt of the German Bundesliga.

Our u13 DA team went undefeated at the National Showcase, beating MLS teams Houston Dynamo and Columbus Crew. Our u15 DA team won the IMG Cup, with wins over IMG, CUP DA, and Virginia DA. The u15 DA team also went unbeaten at the National Playoffs, beating MLS Houston Dynamo, Oakwood Soccer club and drawing with MLS Sporting KC. Our u19 DA and u17 DA were both 1st in the Southeastern U.S. Conference and ranked in the top 10 Nationally at the winter break. Our u17s were selected to play in the Showcase game for the DA National Showcase, which was broadcast Nationwide. Our U17 DA team qualified for the National Playoffs, facing MLS teams LA Galaxy, FC Dallas and Columbus Crew in the playoffs. One of our Charger players captained U.S. U-17s vs Brazil, Holland and England in the Nike International Friendlies. Our u12s played AS Roma and were in the top division of the DA Futsal Showcase, winning 3 of 4 matches against the top DA clubs in the state.

More important than all of these team accomplishments, our players continue to be recognized Nationally and have the opportunity to showcase themselves against the top level of competition in the USA and World. Mason Judge: 2002, Mason has been a regular with the U.S. Youth National teams over the past 3-4 years, since he has been a Charger, and has cemented his role as a key Central Defender in the U.S. U-17 Team. Mason has won an international tournament with the U.S. in Slovenia as a member of the U.S. U-15s. Finished 2nd in the CONCACAF U-15s Championships. Started and played every minute for the U.S. U-17s in the Nike International Friendlies, captaining U.S. vs  Netherlands, and most recently finishing 2nd in an International Tournament with U.S. U-17s in England, while beating Brazil 3-2! Mason has played against countries such as Brazil, England, Portugal, Mexico, Turkey, Russia and many more! After receiving two straight Best 11 player awards for the entire DA Eastern Conference, Mason has moved to Germany with Eintracht Frankfurt, signing a Professional Contract! Ben Sweat: 1991, A lifelong Charger club and DA player, Ben went on to play at USF, as well as playing for the Rowdies NASL team and now a regular starter for NYCFC in the MLS at Left Back. With an impressive last few seasons in the MLS, Ben received his 1st Full international call-up to the U.S. Men’s National Team this past week. Ben made his debut in his hometown of Tampa vs Colombia, in front of a record crowd of 36,000+ fans, a large portion being Chargers players and families supporting him. Ben then earned his first International start 5 days later vs Peru, playing all 90 minutes in a  1-1 draw! Nathan Harriel: 2001, A lifelong Charger club and DA player, Nathan received his 1st call-ups to the U.S. U-18 and U-19 teams this year. After a superb season with the Chargers u17 DA team and a dominant performance in the National Playoffs, Nathan was called into the u19 U.S. team camp to play in a tournament in the Czech Republic. Nathan would go on to earn a starting role at Right Back in the last 2 games, starting the final vs Japan, helping the USA to win both games and win the International Championship in the Czech Republic. His impressive performance earned another call-up just a few weeks later for a 4 team international tournament held in Bradenton, FL. Nate would start against the Venezuela u-20s and against the U.S. u-20s, helping lead them to another international Championship and title. Jake Schick: 2001, Jake has been a top Goalkeeper for the Chargers DA since u14s and has focused tremendously on attacking and improving his game to reach the National Team level. Over the past 2 years, Jake has achieved these goals. Having been called into National Team Camps, Training and matches on 4 occasions. Jake has been a part of the U.S. teams that played the University of Central Florida, Costa Rica, Venezuela and more. JT Copper: 2001, This marks JT’s 2nd season with the Chargers DA, coming over to the Chargers in order to push himself to a new level or development and exposure to the top competition in the Nation. JT excelled in his 1st season in the DA, finishing as the u17s leader in assists and receiving Best 11 honors for the entire DA Eastern Conference. JT’s superb play and development earned him a call-up into the U.S. U18 National Team camp! JT is back at it for the Chargers u19 DA team, with 3 goals in 5 games and will again try to break into the National Team ranks. Landon Ameres: 2002, Landon came to the Chargers DA as a u13 player and spent many hours honing his game with Charger coaches individually to push himself to the next level. After a stellar 2nd season leading the Chargers u14 DA team in goals & assists, Landon received his first National Team call-up in California. Landon continued to excel for the Chargers u17 team the following year, helping lead the team to the National Playoffs. His work on the field would earn him 3 more U.S. U-15/17 National Team call-ups. Landon has now moved to Atlanta United, in his pursuit of a professional contract. Arber Shala: 2004, A lifelong Charger club and DA player, Arber has converted himself from a forward to a top outside back in the Nation over the past 2 years. Arber spent the first 2 years of his DA career playing up an age group, as the Charger staff felt it was imperative to push him technical, tactically and physically to prepare him for the next level. Arber has worked hard at improving his individual and collective game. After a standout performance in 3 games at the National Playoffs playing up a year with the Chargers u15 DA team, Arber was called into his first National Team camp in Chula Vista, California. Arber would go on to play against Real So Cal and LA Galaxy u17 teams while playing with the U.S. U-15s. Arber is continuing to push himself to improve every day, as one of the captains of the Chargers u15 DA team. Riley Cullum: 2004, Riley was developed and grew up playing with Chargers affiliate club, Florida Premier, before moving to the Chargers DA at u12s. Riley is a force up front and a natural goal scorer. After spending the last 2 years working on honing his game for the National Team level, Riley played up a year with the Chargers u15 team in the National Playoffs, scoring multiple goals and dominating games against two MLS teams a year older. Riley’s performance was so strong that he was selected to the Top Drawer Best 11 players in the National Showcase for the u15 age while being a u14. His play was also noticed by the U.S. National Team staff, earning his first call into a U.S. U15 camp in Chula Vista. Riley would go on to play against Real So Cal and LA Galaxy u17 teams while playing with the U.S. U-15s. Riley is continuing to push himself to improve every day, as one of the captains of the Chargers u15 DA team.

What an incredible year it has been for our Chargers DA teams! Representing Clearwater, Tampa, Lakewood Ranch and all of our Chargers community the DA teams have accomplished National Recognition this year!

Chargers Soccer Club Development Academy is looking forward to continuing to push our players with the top competitions available, as our 13 DA team traveled to Italy in September for the Invitational Torneo della Silia, where they played Atalanta, Lazio, Bari and many others. They will also take place in the AS Roma Showcase in December facing the top teams from the USA, as well as AS Roma.

It is going to be another great year and we look forward to the continued development of our players on and off the field! Forza Chargers!  ChargersSCNation!