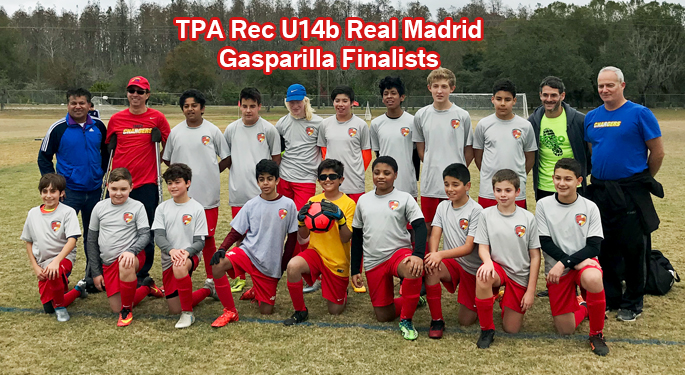 The Chargers TPA Rec 14Ub Real Madrid team took 2nd place in the Silver Division of the Gasparilla soccer tournament, held January 12th to 14th at the Tampa Bay United facilities. The team won their first 3 games by a margin of 8-0, 6-0 and 3-0, accumulating 9 points and tied the Land O’Lakes Liverpool team heading into a final Sunday showdown. Unfortunately, the Chargers lost that final game 1-0, with Liverpool scoring on a corner kick in the 63rd minute of the game. Despite the final loss, the Chargers team played a great tournament - outshooting opponents 81 to 17, and outscoring opponents 17 goals to 1. Chargers Real Madrid team is now looking forward to the next challenge in the Brandon Cup tournament. Way to go!!