MLS SuperDraft Claims One Of Our Own!! 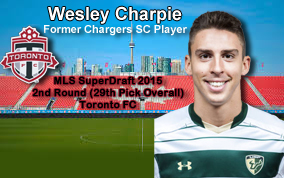 Wesley Charpie, a former Chargers Academy and USF Bulls player was drafted by Toronto FC in the 2nd Round as the 29th overall draft pick in the 2015 MLS SuperDraft in Philadelphia on Thursday, 1/15/15.

This Tarpon Springs native was always a standout player!!  USF reports that he “was a mainstay in the USF starting 11 since his freshman season, starting all 81 games during that span. Charpie started his career as a midfielder before moving to right back his junior year. Since then he has helped USF post 16 shutouts while continuing to be an offensive threat with 12 assists. Over his USF career, Charpie scored five goals to go along with 21 assists for 31 points. He also helped lead the Bulls to an American Athletic Conference Championship in 2013, three NCAA Tournament appearances and a run to the Elite Eight in 2011.  The 2014 first-team All-American Athletic Conference selection became the 22nd USF player overall to be picked in the MLS Draft.”

"I am very proud of Wesley. He worked very hard to achieve his goal”, said Garth Pollonais, Chargers Academy Director.  “His determination and drive have never been in question. I wish Wesley the best in Toronto."

This the 2nd consecutive year the Chargers have had a selection in the MLS SuperDraft.  Ben Sweat was drafted last year by the Columbus Crew.  Wesley joins a prestigious group of prior Chargers SC players that currently play professionally.

Congratulations, Wesley!!  We are very proud of you!!