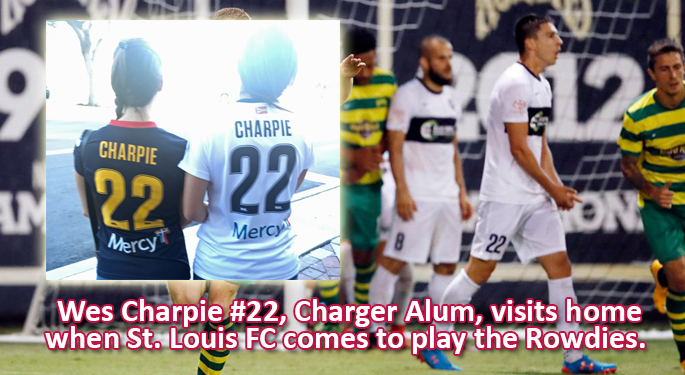 Wes Charpie, a Charger Alumni, was last noted on the Chargers site in our 1/15/15 article, when, after his 2014 graduation as a student-athlete with the USF Men's Soccer team, was drafted in the 2nd round to play professionally with Toronto FC at the 2015 MLS Superdraft - MLS SuperDraft Claims One Of Our Own!!

Charpie played the 2015 season for Toronto II in the USL – logging 1634 minutes and registering one assist in his rookie season and then in 2016 he played 1793 total minutes over 22 appearances for the club.

And then this season, Wes Charpie - now # 22 - continues his soccer career with St. Louis FC coming to town yesterday when the St. Louis played the Tampa Bay Rowdies.

Wes Charpie's mom was seen in the Charpie jersey.  Way to go, Mom!!  Great to see you, Wes!!