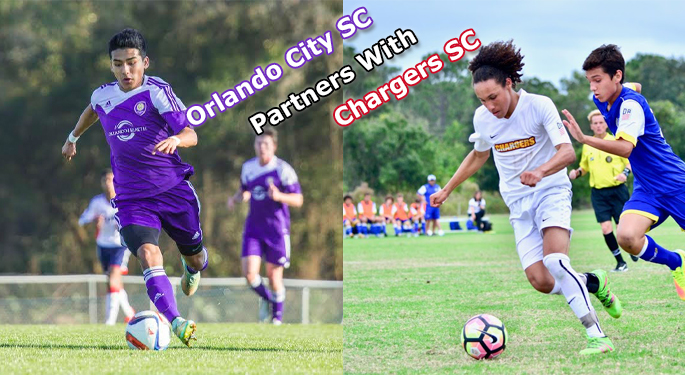 Tampa Bay, Fla. (April 5, 2017)  - Chargers Soccer Club partners with Orlando City SC, one of the most up and coming professional MLS clubs in the U.S. The partnership will offer Chargers elevated player development and identification opportunities to both its boys and girls youth soccer programs. The Chargers' most advanced players will be able to continue their elite development through the Orlando City SC U.S. Soccer Development Academy and eventually work their way to Orlando City B and the First Team.

"We're thrilled to be partners  of  such a prestigious MLS Club," Chargers SC Academy Director Roberto Lopez said. "It provides our players with a pathway to professional soccer in the United States. Over the years, Chargers SC has produced top professional and national team players and now we can channel all our energy to help accelerate that process and help Orlando identify and develop young talented players."

We are very excited to start this partnership with Chargers. It's our belief that player development is best achieved when working together with other clubs in our region to focus on the players," Orlando City General Manager Niki Budalic said. "We understand our role in the development pyramid and providing opportunities to elite players will be a priority as part of an expanded scouting network. Our shared vision and philosophy make " for  a great starting point and we look forward to working with Roberto and the rest of the Chargers organization"

"I'm excited by our partnership with Chargers and the future benefits this will bring to both clubs," Orlando City Pro Academy Director David Longwell said. "We are committed to creating a pathway in Florida for the highest level of players to progress to Orlando City's Academy and First Team. Partnerships with clubs like Chargers will support the pathway for players to achieve this. I've been impressed with how Roberto and his Academy staff are developing players and I'm looking forward to working with them for the foreseeable future."

After winning three USL-Pro regular season championships and two post-season titles over a four-year span, Orlando City SC quickly set the standard for professional soccer clubs, both on and off the field, and was awarded the 21st franchise in Major League Soccer (MLS) on Nov. 19, 2013. The Club began MLS play in Central Florida in 2015, setting league attendance records for an expansion side in its first season and has welcomed over 60,000 fans for consecutive season-opening matches in 2015 and 2016. The Lions, who held the second highest average attendance in the league for the second consecutive season, will  begin  play in a privately funded, state-of-the-art downtown stadium in the 2017 MLS season.

OCSC also has a youth club, Orlando City Youth Soccer (OCYS). Operating out of the Seminole Soccer Complex, OCYS which has over 2700 members, provides soccer programs to children aged 4-18, at both recreational and academy levels throughout Seminole and Orange Counties. OCYS is a member of the U.S Soccer Development Academy and Elite Clubs National League.

The Chargers Soccer Club provides soccer opportunities at all levels of play to players aged 4-18 throughout the Tampa Bay region with programs and fields in our Clearwater, Lakewood Ranch and Tampa communities, covering all sides of Tampa Bay. We are one club comprised of three communities in three different counties (Pinellas, Manatee & Hillsborough) that primarily draws players from six contiguous Bay Area counties (including Pasco, Sarasota & Polk counties).

The Chargers Soccer Club has approximately 90 competitive teams, USSF Development Academy Program, three recreational programs, TOPS Soccer and an adult league team totally about 3,000 players utilizing 50 soccer fields. Since the 1970s, it is safe to say that the Chargers SC has hundreds of thousands of alumni that we have had the honor of fostering, not only their development as soccer  players,  but also their personal growth in becoming well-rounding and accomplished adults. For more information: www.chargerssoccer.com.