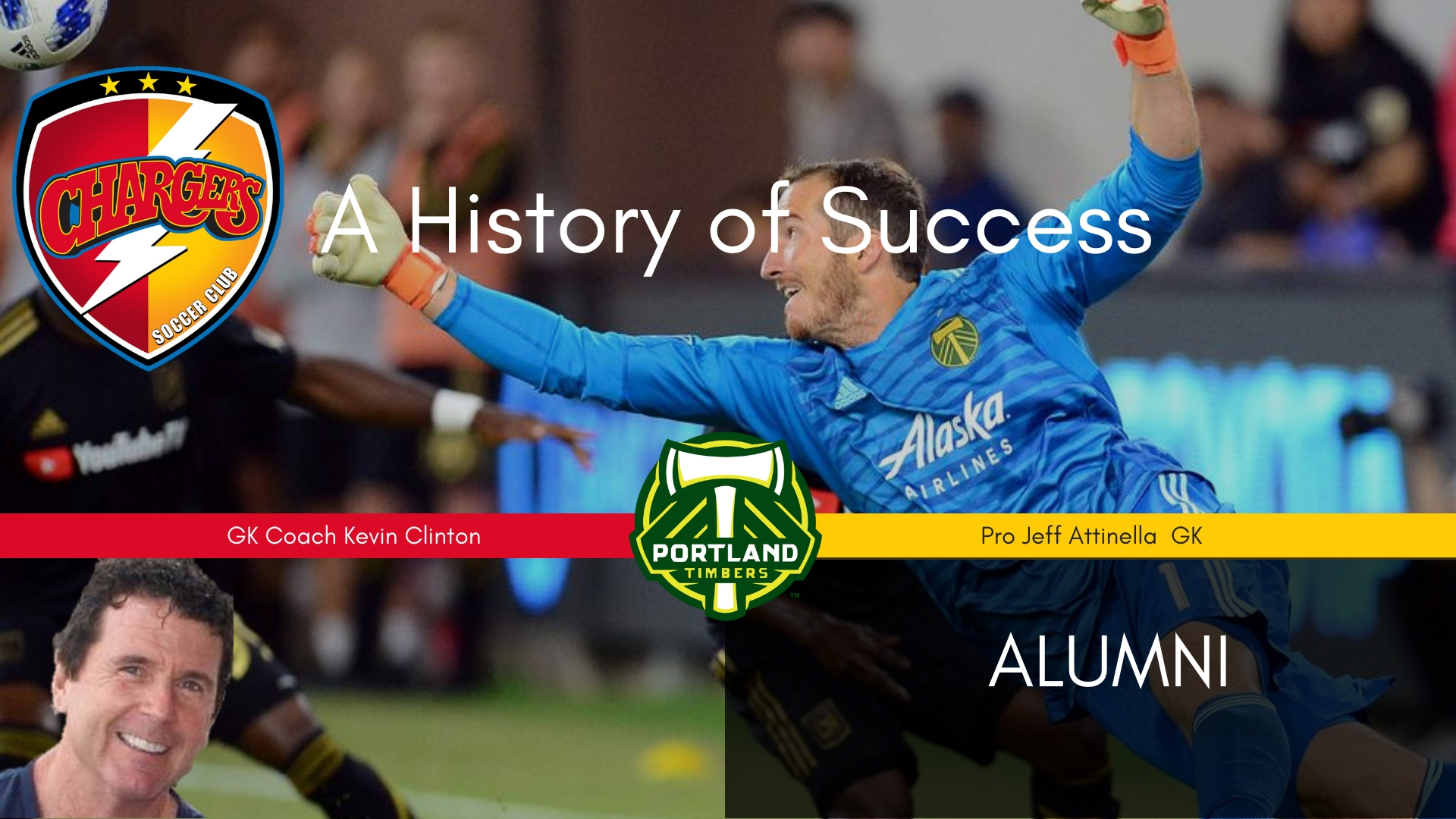 This is a story of two great Chargers (see detail about each below) whose paths continue to overlap.  Kevin Clinton, who has been a Chargers GK coach for the past 20 years, and Jeff Attinella, who is a Charger Alum with a continued professional soccer career (currently with the Portland Timbers) have continued their coach/player relationship.  Not only does Attinella report that Clinton made a huge difference in his youth GK soccer training in preparation for and through his professional soccer playing career (Click the YouTube link below - a podcast interview with Jeff), but their friendship is a joy for both men.

This Saturday, December 8, 2018, Attinella & the Portland Timbers, are playing in the MLS Cup Finals against Atlanta United.  Jeff has extended a personal invitation to Kevin, his coach & friend, to attend the game. The game will be played in Atlanta at Mercedes_Benz Stadium & will be aired on major US networks.

We are all joining Kevin Clinton in cheering on Jeff Attinella & the Portland Timbers.

This YouTube video is a podcast interview with Attinella.  Minute 2:20 begins the portion of the interview where he talks fondly of his coach, Kevin Clinton.

Coach Kevin Clinton has been part of the Chargers Coaching Staff for 20 years this year - based at the Chargers Clearwater campus and with the Chargers DA (Development Academy).  In 1979, Clinton was the second round (23rd overall) draft pick as a goalkeeper selected by the Tampa Bay Rowdies*.   He played with Rowdies for quite a few years.  In 1992 Clinton graduated from University of South Florida with a bachelor's degree in engineering and computer science holding several positions in the information technology field over the years.  Luckily for the Chargers and many aspiring goalkeepers, Kevin Clinton continued his GK career as a GK trainer and coach with the Chargers.

* The Tampa Bay Rowdies was an American pro soccer team that was based in Tampa playing home games in, what was then, Tampa Stadium (later demolished and replaced with Raymond James Stadium) until the NASL folded in 1984.

** Luckily, a new Tampa Bay Rowdies club was formed in 2008, first taking the field in 2010, and that club is the one that plays at Al Lange Stadium in St. Petersburg.

Jeff Attinella is a Charger Alumni and his last years of his youth soccer experience he played in the Chargers Development Academy (DA).  Attinella then attended University of South Florida where he played from 2007-2010 being awarded NSCAA Third Team All-Region, Hermann Trophy Watch List and Soccer America Preseason All American in 2010, NSCAA First Team All-American, Big East Goalkeeper of the Year and NSCAA All-Region First Team in 2009 and NSCAA All-Region Second Team in 2008.

Attinella's professional career started with a first round (14th overall) draft pick in the 2011 MLS Supplemental Draft by Real Salt Lake, but was release without signing when he signed with Tampa Bay Rowdies making his professional debut in April, 2011.  2012 was a breathough year for Attinella as he played every minute of every game and winning several awards:  Defensive Player of the Week awards, one NASL Player of the Month Award, and was named to the 2012 NASL Best XI.  In late 2012 Attinella signed with Major League Soccer (MLS) club, Real Salt Lake.  In 2016 Minnesota United FC announced the selection of Attinella and was quickly traded to the Portland Timbers.