AS ROMA EXPANDS PROGRAM TO U.S. 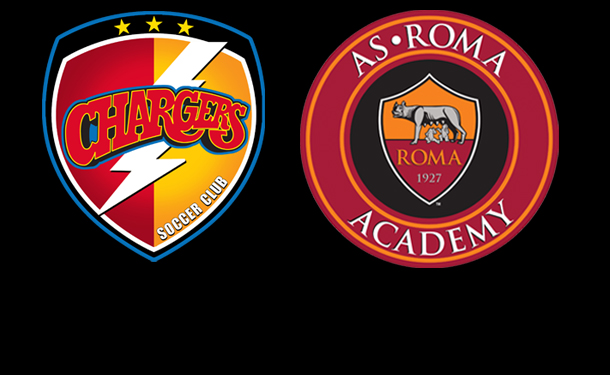 ROME (January 28, 2015) – Today AS Roma announced the expansion of its renowned youth soccer academy program to the United States. The club will now have a direct, year-round partnership with nine elite U.S. soccer academies – including the Chargers Soccer Club of Clearwater, Fla. – with a focus on identifying and developing top-tier players.

Today Roma will also host its first U.S. Academy Summit in Miami, where club ownership and executives will meet with leadership from each academy club.

The nine clubs, which are all part of the U.S. Soccer Development Academy, are:

“We are very proud to launch our U.S. Academy program and to formalize our partnership with select top-flight U.S. clubs,” said AS Roma President James Pallotta. “Player development in the United States continues to be a top priority for us.  We are confident this initiative will be great for the country and club and produce many star players of tomorrow.”

Added Mia Hamm, Member of the AS Roma Board of Directors: “As someone who spent their youth living in both the U.S. and Italy, there’s a personal satisfaction that comes with seeing Roma investing significant resources to player development in the States. There’s a lot of talent here – and it’s great that the club continues to recognize that.”

In creating its expanded academy Roma has built a comprehensive partnership program with the U.S.-based clubs, all with the objective of developing elite players.  Elements include ongoing coaching development and exchanges, tailored physical performance programs and team training and competition in both the United States and Italy. “Since day one we have been committed not only to identifying the best partner clubs but ensuring we have constant input from them to ensure the program is successful. We have a truly unique opportunity to bring together the best of youth football from Italy and U.S. and produce fantastic results,” said AS Roma CEO Italo Zanzi.

"The Chargers program is proud to be affiliated with AS Roma,” said Chargers Academy Director Garth Pollonais. “It's a fantastic opportunity for our players and coaches. AS Roma is a global brand and having them partnered with us can only enhance our program. This affiliation will provide even more motivation for our players to strive for excellence."

AS Roma’s academy in Italy is considered among the very best in Europe. The academy has nine elite teams comprised of 226 players that compete in the official championships governed by the Italian Football Federation. AS Roma’s youth teams have captured numerous Italian championships, including nine Scudetto titles for its “Primavera” – the oldest youth level. Over the years, AS Roma’s youth teams has produced 671 players that have competed for AS Roma’s first team, 23 players currently playing in Serie A and three FIFA World Cup champions (Francesco Totti, Daniele De Rossi and Bruno Conti). Click here for more information on AS Roma’s academy.

AS Roma is currently in second place in Serie A, the top-tier professional league in Italy.

Off the pitch, AS Roma is planning a new 52,000-seat stadium and surrounding entertainment development – Stadio della Roma – that will serve the club and city of Rome as the pre-eminent sports and entertainment district in the world.  More information is available at www.stadiodellaroma.com.

The Chargers Soccer Club was started in 1972. The Chargers have over 3,200 players and locations throughout the Tampa Bay area, including Clearwater, Tampa and Lakewood Ranch in Bradenton. The original club location in Clearwater has seven appearances at the USYSA National Finals, including winning one National Championship. After mergers with the Black Watch, Fusion and Countryside Lightning clubs, the Chargers have 11 national final four appearances and three national titles. The Club is led by long-time Director of Coaching Peter Mannino, Director of Soccer Operations Jim DiNoble and Academy Director Garth Pollonais. Steve Heighway supports the staff as Technical Advisor. The Club has over 50 fields, including the Premier Sports Campus in Bradenton with 30 professional natural grass fields. The Chargers have alumni playing in Major League Soccer as well as other pro leagues.