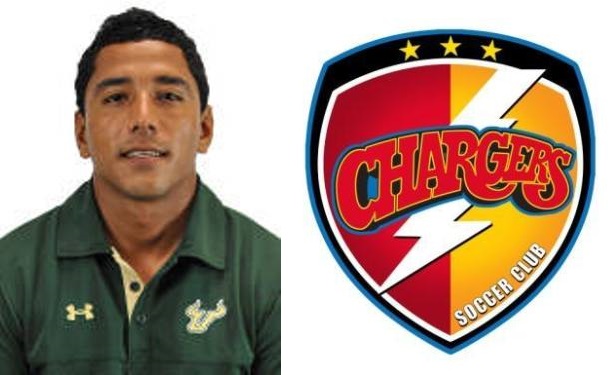 CLEARWATER, Fla. – Chargers SC is pleased to announce that Sammy Castellanos has been appointed as head coach of the club’s U13/14 U.S. Soccer Development Academy team, which is competing in its first season. An assistant men’s soccer coach at the University of South Florida, Castellanos brings an impressive resume as both a coach and player.

“Sammy brings a great deal of experience as both a coach and a player that we believe is invaluable to this age group,” Chargers Academy Director Garth Pollonais said. “His knowledge, dedication, passion, attitude, and deep desire to develop young players will be a great asset.”

A  Philadelphia native, Castellanos played professionally for two years in the Honduras 1st Division for both Deportes Savio (2008-09) and C.D. Montagua (2006-07).  He also played for the Philadelphia KIXX indoor soccer team in the National Indoor Soccer League (NISL) from 2007-08.

A 2006 graduate of USF, Castellanos played his final two seasons (2005 and 2006) for the Bulls after transferring from Rutgers. A midfielder, Castellanos helped the Bulls to a 2005 BIG EAST regular season championship and a runner-up finish in the BIG EAST Tournament. Castellanos also played for the under-17 United States National Team.

He returned to the Tampa Bay area after spending the 2010-11 season as an assistant coach at Philadelphia University. Castellanos also had significant youth soccer coaching experience, coaching for four years at the helm of FC Delco's under-18 team.

The U.S. Soccer Development Academy, in its continual effort to progress and enhance player development, announced last year the launch of an U-13/14 division starting in the Fall of 2013. The U-13/14 division consists of current Academy clubs as well as a limited amount of clubs from outside the existing Academy structure from markets throughout the U.S.

The Academy is in its seventh season with 78 teams in three conferences and seven divisions at the U-15/16 and U-17/18 levels. The 2012-13 campaign marked the first full implementation of the 10-month season, which provides elite players with an opportunity to train and compete in an environment consistent with international standards of player development.

Nearly 800 Chargers Soccer Club alumni have gone on to play college soccer since 1972, including more than 100 during the past four years.

In addition to the NCAA, former Chargers can currently be found playing in MLS, European professional leagues and for U.S. National Teams. Recent Chargers SC alums Zac MacMath and Jeff Attinella currently play for the Philadelphia Union and Real Salt Lake of the MLS, respectively, and Ben Sweat was drafted in the first round in 2014 by the Columbus Crew.