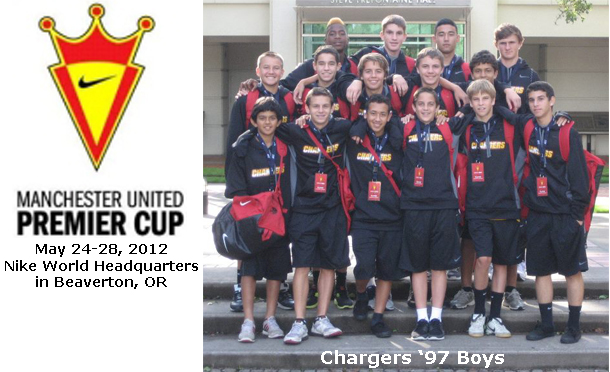 Good luck to the Chargers 97 Boys (Coached By Garth Pollonais & Roberto Lopez) at the 2012 Manchester United Premier Cup U.S. Finals held at Nike World Campus, Beaverton, Oregon, May 24-28, 2012. This is the top U14 tournament in the world with the top 20 clubs from throughout the United States participating with a chance to represent the U.S. at the world finals to be held in July in China! Click here to view the Chargers 97 team’s progress.

The most competitive U14/15 tournament in the world

The Manchester United Premier Cup (MUPC) is the largest international youth football tournament in the world, involving over 6,000 teams from over 40 countries. But, the Manchester United Premier Cup is about more than mere numbers. It is about engendering in the youth of today the desire to become the heroes of tomorrow. It is about promoting the cause of youth soccer and its impact extends far beyond the fortunate few who make it to the Cup final. Its reach extends to the thousands of local teams and programs that exist because of the dream of reaching that final. The MUPC has had some of the most storied soccer clubs in the world participate, including clubs such as FC Barcelona, Real Madrid, Ajax, Arsenal, Corinthians, Futbol Club America, FC Porto and, of course, Manchester United.

Teams from around the globe compete in regional or national qualifying tournaments, all with the ultimate goal to reach the MUPC World Finals for boys, and the Gothia Cup tournament for the girls U.S. winner. Once again, Nike World Headquarters in Beaverton, Oregon will play host to the U.S. Finals for the MUPC.

In the U.S., the MUPC U.S. Finals has annually drawn the most competitive U14 and U15 teams across the nation, and, as a result, the U.S. Soccer Federation has taken notice. Over the past 11 years US Soccer staff coaches have been on hand at the tournament to scout players for the National Team programs. Many players who participated in the MUPC U.S. Finals have gone on to play for the U.S. National Teams and various professional teams.

For more information, go to www.premierinternationaltours.com/soccer/manchester-united-premier-cup