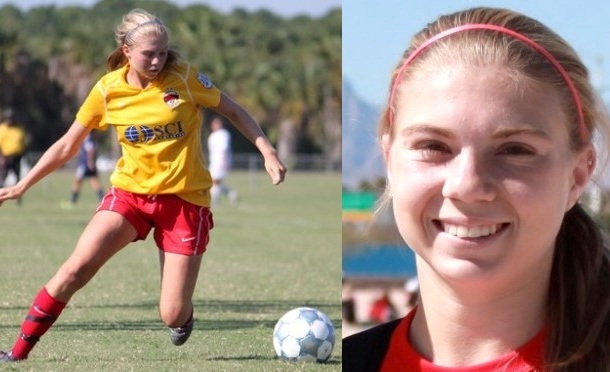 CLEARWATER, Fla. - Chargers SC standout Melinda Lukas, a member of Coach Siggi Nagele's Clearwater U18 Girls Elite team, has been selected as a member of the 2012 NSCAA High School Scholar All-America Team, recognizing the best high school players on the field and in the classroom in 2012. Lukas, who will attend Georgia Southern University on a soccer scholarship in 2013, has been invited to attend the annual NSCAA All-America Luncheon on Saturday, January 19, 2013, in Indianapolis, Indiana. The event honors All-America players at the youth, high school and college youth levels. More than 1,200 attendees are expected at the luncheon, celebrating the best amateur soccer players in the United States for 2012.

The luncheon is held in conjunction with the 66th annual NSCAA Convention, the largest annual gathering of soccer coaches in the world. The convention draws more than 10,000 coaches, administrators and soccer business professionals from across the country and throughout the world. It features coaching clinics, workshops and meetings and has the nation’s largest soccer tradeshow in a 100,000 square-foot exhibition hall. Major League Soccer annually conducts its SuperDraft at the convention.

To be eligible for the NSCAA High School Scholar All-America Team, players must be graduating seniors recognized as outstanding players in their state and must have at least a 3.75 cumulative grade point average throughout their career. Lukas maintains a 3.8 GPA at North Ft. Myers High School and commutes two-and-a-half hours each way to Clearwater for practices and games.