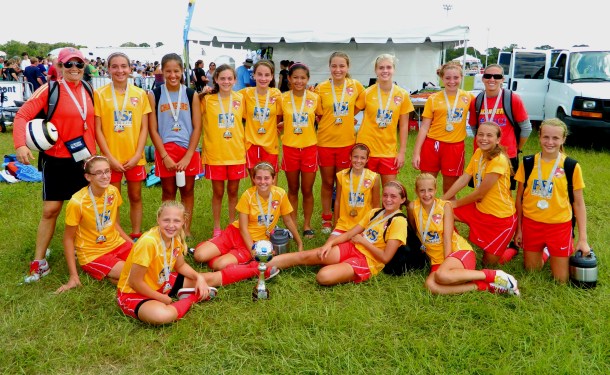 LAKEWOOD RANCH, Fla. – Chargers SC enjoyed a high level of success on the field at the 2012 Tampa Bay Labor Day Showcase, with 11 of the club’s teams advancing out of the group stages and four claiming championships at Premier Sports Campus.

The tournament, by far the largest in Florida during the weekend, was an unprecedented success as the pristine fields at Premier Sports Campus made for a high level of play the entire weekend. Champions were crowned in 22 divisions on Monday, with Chargers SC Clearwater and Chargers SC Lakewood Ranch each earning two titles.

The club had its most success in the 16-team U14 Girls Division, with all three Chargers SC teams winning their groups and advancing to the semifinals. In the end, Coach David Quintero’s 98-99 Lakewood Ranch elite squad took the trophy, defeating Steve Wegerle’s 98-99 Tampa Elite team in the semifinals and Erin Morse’s 98-99 Clearwater Elite team in the finals.

The other champion on the girls’ side was the 94-95 Clearwater Elite squad coached by Siggi Nagele, which defeated the Lee County Strikers in the U18/19 final.

Leading the pair of boys’ champions was the 99-00 Lakewood Ranch Elite team (U13) coached by Tim Mulqueen, which won for the second consecutive year. Coach Marco Pollastri’s 02-03 Clearwater Yellow team took the U10 title.