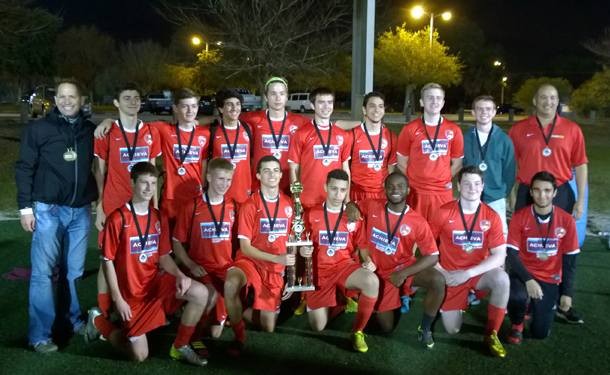 Congratulations to our Chargers U19 Boys Soccer Team Coached by Pablo Oyarce for becoming the U19B Champions in the Gasparilla Cup 2015 played in Tampa, FL from 1/16/15 to 1/18/15.

Our Chargers U19B soccer team was able to continue their Gasparilla Cup U19B reign by winning the Gasparilla Cup for the third year in a row. In this year’s Gasparilla Cup 2015, the team faced fierce competition from the other participating teams as the top three (3) teams managed to beat each other.

Chargers team had a bit of a rough start by losing their Friday night game 0-1 against a tough West FL Flames - Brandon team, but our Chargers team come back on Saturday morning with a 3-0 decisive win against the West Pasco FC team.

The Championship match started very tight with the first half ending with a partial score of 0-0, however, the team came out on fire for the second half and within the first 10 minutes after the break, Our Chargers team was up 2-0. Team stayed on fired the rest of the second half and created many more scoring opportunities which led to a 6-1 Chargers Championship win.

Please make sure to congratulate the team when you see them at their next practices and future games.