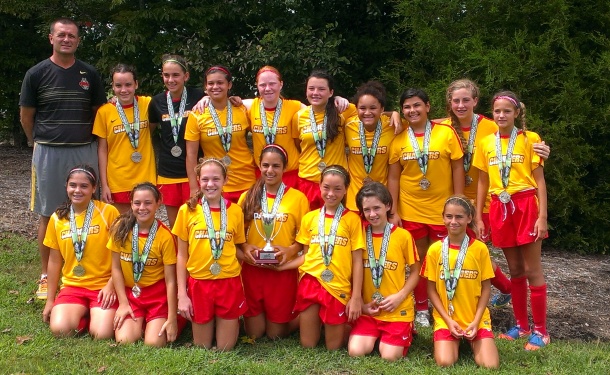 CLEARWATER - Congratulations to the Chargers SC Clearwater '00-'01 Girls Elite, who reached the final at the prestigious Atlanta Cup in Geaorgia recently. Coached by Ljubomir Korda, the U13 girls rolled through the group stage and semifinals before falling just short in the championship match.

That set up a showdown with Tennessee Soccer Club Elite Sunday morning for the top spot in the group.  After a scoreless tie the Chargers took the Group B crown, advancing to the semifinals vs. Group A runners-up Lady Chiefs Premier. In another tightly contested defensive match, the teams finished scoreless after regulations, with the Chargers advancing to the finals vis penalty kicks.

In Monday morning's championship match the Chargers were once again faced with Tennessee Soccer Club Elite, and a late goal gave TSC a 2-1 victory.

Congratulations for a great start to the 2013-14 season, Chargers!