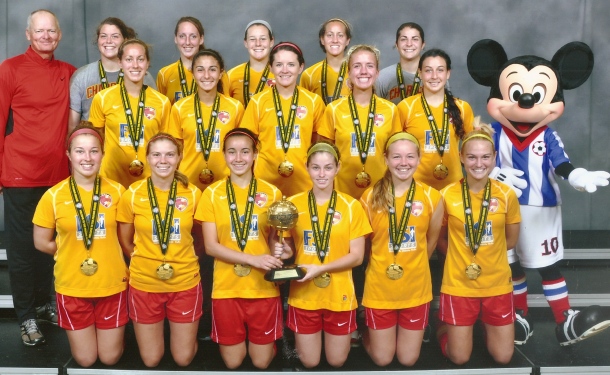 CLEARWATER, Fla. - The Chargers SC 94-95 Clearwater Elite Girls, coached by Siggi Nagele, captured the Premier Red Division crown at the 2013 Disney Girls Soccer Showcase. The squad, which entered the tournament ranked third in Florida and 162nd in the nation, defeated the New York Rush Patriots 2-0 in the title game Thursday. Placed in a group featuring state champions and national top 50 teams, the Chargers showed their class. They opened the tournament on December 31 vs. the Farmingdale Freedom of New York East, currently ranked #43 in the nation. The Chargers rolled, 3-0, to move to the top of the group standings. The lone setback came on Day 2 at Disney's ESPN Wide World of Sports complex, with the Chargers falling 2-0 vs. TS United, #39 in the nation and the Pennsylvania East state runners-up.

Waiting in the finals were the #76-ranked Patriots, New York East state champions and 2012 Region 1 semifinalists, who won their group at 3-0-0 having scored eight and allowed one. The Chargers were up to the task, winning 2-0 to claim the crown. It was the team's second Disney title in three years and the third for Nagele.