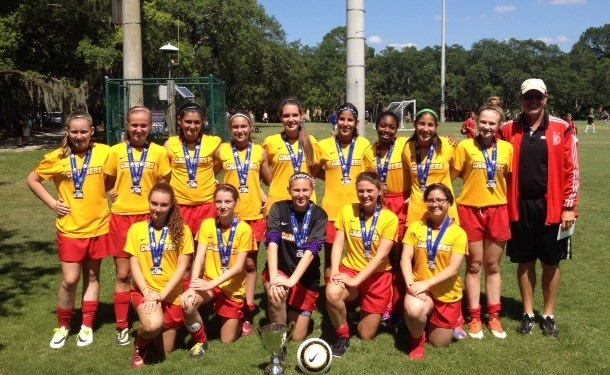 The Fishhawk Ranch Chargers U15 girls battled through 3 preliminary round matches without surrendering a single goal. In the final they met Tallahassee United FC, who they had defeated earlier in the tournament 1-0. The final was a great match which saw our FHR girls take a 1-0 lead, and shortly after TUFC scored the 1st goal against FHR for the weekend. A brilliant free kick goal by the FHR center back with under 8 minutes left provided the game winning goal in a hard fought 2-1 victory! This tournament culminated a tremendous year for the FHR U15 girl’s Elite who were crowned ACDC Columbus Day Champions, Region C Cup runner up and President’s Cup runner up.  "We are extremely proud of our girls", said Head Coach Peter Gutsche.