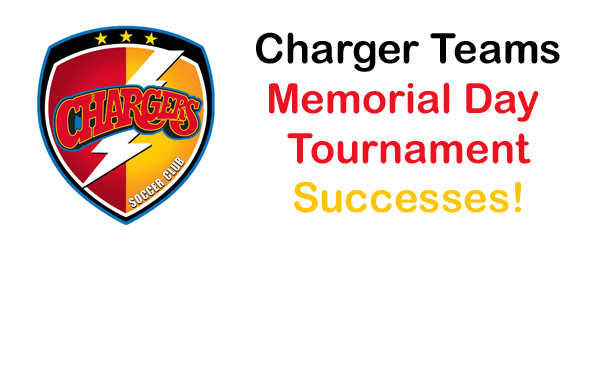 Quite a few Charger Success in Memorial Day Tournaments.

See photos and write ups below. The Lakewood Ranch U-16 Boys went undefeated in group play under rising U-17 Boys coach, Jason "JP" Peters, at the Disney Memorial Day Soccer tournament. Group play included a 3-0 victory over Got Soccer's #14 ranked team in Florida and 3 consecutive clean sheets. The boys eventually lost in the semi-finals. Coach JP and Coach Roy are excited to be working with the team and have added training sessions at Premier Sports Campus to help U-17 players prepare for tryouts:
Wednesday, 5/28, 6 PM:  Training session with JP
Thursday, 5/29, 6 PM:  Training session with JP
Tuesday, 6/3, 6 PM:  Tryouts
Wednesday, 6/4, 6 PM:  Tryouts
Players can pre-register for tryouts at Lakewood Ranch at the following URL:
https://www.gotsport.com/asp/application/reg/?ProgramID=28128&Type=PLAYER The Clearwater U10 Boys competed in the Disney Memorial Day Soccer Shootout in the U10 8v8 Division.  They advanced to the Semi-Finals and lost 1-0 in a tough game to eventual tournament champion Miami Shores.  Heach Coach, Marco Pollastri.  Assistant Ciach, Jason Kaylor. Our FHR U13g Elite had a tremendous weekend at the Disney Memorial Day Tournament. They went undefeated through all 3 group matches outscoring their opponents 9-2. In the semi-final the girls played great possession soccer on the way to a fantastic 2-0 win against Strictly Soccer. A valiant battle in the final against Plantation FC came up short. We are so proud of how hard the girls worked to deserve this achievement of being the Finalist in the Disney Memorial tournament, congratulations ladies! The Clearwater U-15 Elite girls are Disney Memorial Champions!!! They competed in the Gold division this weekend in Auburndale. They won 2 out of 3 games in pool play to take first in their bracket. Beat Wellington in the semi's 4-2 and competed in the finals against Boca Gold. After a full game and two 5 minute overtimes, the game went to PK's. Coached by Erin Morse , this team has continued to improve all year and finished strong as Champions!!

CLW Chargers U9s & U10s playing in U11 Bracket at Disney This team of 12 girls, 9 u10's and 3 u11's, competed in the Disney team over the weekend in a U11 bracket.  They played very well but lost their first 2 games 1-0 and 1-0 (second game in group play was to the eventual winners of the bracket).  The 3rd game they defeated a team from Gulf Breeze FL 3-2.  Big kudos to these girls who played hard and never gave up.  Coach Traci Guy pictured on left and Coach Allison Tucker pictured on right.