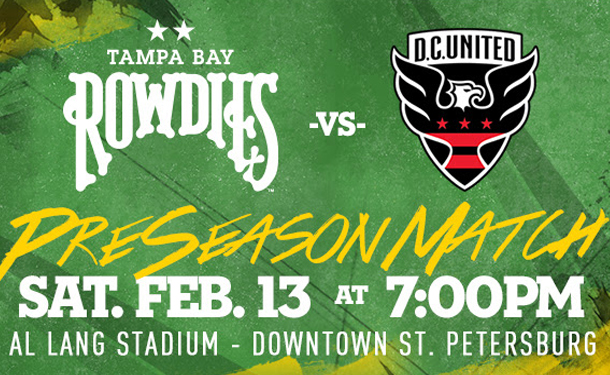 The Tampa Bay Rowdies have lined up an exciting match to open their 2016 preseason schedule, securing a game against four-time MLS Cup champion D.C. United. Kickoff is at 7 p.m. on Saturday, February 13 at Al Lang Stadium.

EXCLUSIVE CHARGERS OFFER: The first 100 youth tickets to be purchased by CLICKING HERE and entering the promo code CHARGERS will have access to the field for pre-game warm-ups and participate in the Rally Tunnel.  A Rowdies representative will be reaching out to you with directions once your purchase has been finalized.

Tampa Bay Rowdies fans will get their first look at the revamped roster against one of North America's most prestigious teams. This game is a chance for the green and gold to begin their on-field preparations for the run at the North American Soccer League's Championship Final in 2016.

D.C. United will have plenty to play for, with this match serving as a crucial tune-up test for its CONCACAF Champions League quarterfinals series against Mexico's Queretaro FC. D.C. United plays its first leg against Queretaro in Mexico just 10 days after playing against the Tampa Bay Rowdies, so this will be an important match for both teams.