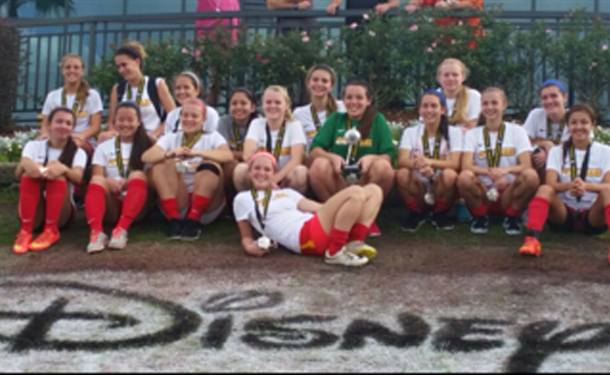 Coach Steve Wegerle recently reported being very proud of the Tampa Chargers U16 Girls at the Disney Showcase (12/31/14 – 1/3/15).  They beat ARSENAL COLORADO GOLD 3-2; beat TRIANGLE UNITED 98 GOLD (North Carolina) 2-1 and had a 0-0 draw against FORT WAYNE UNITED FC 99 ACADEMY (Indiana) all in group play to move on to the finals where they played CLASSICS EAGLES FC RED (Ohio).  The finals game was a nail bitter – ended in a 0-0 draw, but the girls lost in PKs.

Coach Wegerle said that “there were some very good individual performances, but our team play was the highlight of the tournament”.

Congratulations girls!!!  We are very proud of you!!